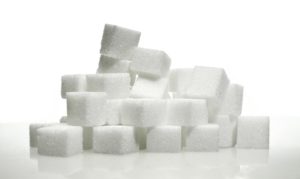 Sugar is sweet on the senses and hard on the mind. A new study finds “sugary, Western-style” diet can contribute to Alzheimer’s.

Diets high in carbohydrates raise blood sugar levels which increases the risk of diabetes and the onset of Alzheimer’s Disease, according to a study published in Diabetologia.

People with high blood sugar had a faster rate of cognitive decline than those with normal blood sugar levels. The higher the blood sugar, the quicker the demise.

Those with type 2 diabetes are twice as likely to get Alheizmer’s, although as the new study suggests they may not be directly related.

A separate study in 2012 looked at 1,000 patients. People with the highest carb-intake were 80 percent more likely to develop mild cognitive impairment — or MCI, a precursor to Alzheimer’s — than carb-ivores.

As in all things health-related, diet is a significant factor in both diabetes and Alzheimer’s because they both deal with the body’s response to insulin.

There are a few theories as to why high blood sugar triggers dementia. Diabetes weakens blood vessels, causing mini-strokes in the brain. Increased sugars can also make brain cells insulin resistant, causing them to die.

READ: WHY JEFF BEZOS IS BACKING THIS SILICON VALLEY SCIENTIST WHO IS WORKING ON A CURE FOR AGING

The perfect diet for both a healthy body and mind remains a mystery.

“It’s hard to be sure at this stage what an ‘ideal’ diet would look like,” says Rebecca Gottesman, a professor of neurology at Johns Hopkins. “There’s a suggestion that a Mediterranean diet, for example, may be good for brain health.”

CAN A NEW PARADIGM IN DIAGNOSITICS HELP YOU LIV...