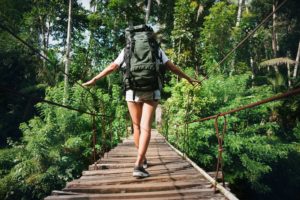 Want to be the next great creative thinker? A George Orwell, Vladimir Nabokov or Soren Kierkegaard? Take a walk on the wild side, new scientific studies say.

For years, taking walks in nature have been credited for boosting scientific and literary inspiration. Growing numbers of scientific studies prove a nature walk not only helps people increase creativity and mental clarity but also reduce mental illness and negativity.

With 50 percent of the world’s population living in cities, one study researched the link between urbanization in the past half century with the rise in mental illness.

The main idea: could our lost connection with the natural world could be the culprit?

READ: MEET THE 98-YEAR-OLD CEO WHO JUST MIGHT BE FITTER THAN YOU

A 2015 study by Gregory Bratman, of Standford University’s Center for Conservation Biology, explored just that question. The research suggests the lack of time spent in nature could create a harmful pattern of “self-referential thought” that zeros in on negative aspects of the self. This “rumination” is a factor for depression and mental illness.

The nature walk decreased obsessive and negative thoughts and helped the brain replenish itself.

City dwellers were divided into two groups — one group walked around a grassy area near Stanford University and the other along a busy road in Palo Alto. They both walked for 90 minutes each. The Stanford University study showed brain scans for the nature walkers had reduced neural activity in the part of the brain that promotes behavioral withdrawals connected with mental illness. The other group had no change.

The nature walk decreased obsessive and negative thoughts and helped the brain replenish itself.

In the 1980s, Rachel and Stephen Kaplan explored what they called “Attention Restoration Theory (ART)” in their book, The Experience of Nature: A Psychological Perspective. Our attentional system can decline from the hustle and bustle of urban life. Time in nature promotes the opposite. It allows the brain to replenish and restore itself.

A wilderness experiment by Terry Hartig appears to back up this theory. He compared the effects of wilderness vacationers to urban vacationers. The wilderness group showed increased attention capacity through proof-reading tests.

A separate wilderness study by psychologists David L. Strayer and Ruth and Paul Atchley had a group go on a four-day nature hike.  They had no technology, but later were given tasks that forced them to use creative and problem solving skills. Their performance improved by 50 percent.

And, as a picture is worth a thousand words, maybe a thousand steps too.  Research by Carolyn Tennessen and Bernadine Cimprich found college students whose dorm rooms looked out to more pastoral scenes scored better on attention measures than others.

For more on the science of hiking, check here.