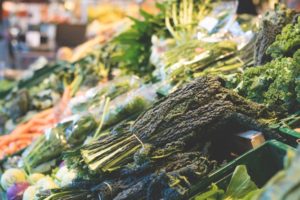 You’ve been told a thousand times to eat your veg. But here’s a good question: why should you eat your veg? After all, plants don’t contain all the vitamins and minerals that you need to be healthy. And, in some cases, they provide surprisingly little.

Beef liver has several times more vitamin A than any plant, including carrots, which, though noted for that particular nutrient, actually only contain beta-carotene, which has to be converted by the body into vitamin A.

WATCH: WHEN YOU EAT MATTERS…A LOT

Oranges might come to mind when you think of vitamin C, but you can also get that from offal. Seafood is the best source of the essential omega-3 fatty acids that you need to survive and thrive; you can’t get them from vegetable, except purslane (a weed-like herb with a peppery lemon flavour) and algae.

We all know how crucial vitamin D is for health, yet plants deliver virtually none, except for certain mushrooms such as porcini. The same is true of the B vitamins, especially B12, which comes from animal foods like meat, eggs and wild salmon. Vegans must supplement with vitamin B12 to avoid becoming deficient.

Plants do contain some protein, and some, like kale and black beans, even have significant amounts. But plant protein is poor quality compared to animal protein. There’s nearly seven times as much protein in ground beef as in spinach, for example.

This is where my vegan and vegetarian friends run into trouble. Without eating meat or fish, they’re more likely to end up with nutritional deficiencies of iron, calcium, vitamin K, omega-3 fats, vitamin B12 and fat-soluble vitamins such as A and D – which is not to be ignored, particularly given the number of vegans in the UK has reportedly soared to 3.5 million.

However, vegetables do contain carbs, a source of energy. In fact, the majority of your diet should be carbs – not bread, potatoes, sugar, beans, or grains, but vegetables. They don’t spike blood sugar (except the starchy ones) and they are critical for health.

But it’s worth noting that carbs are not a nutritional necessity. While there are essential amino acids (protein) and essential fats (omega-3 and omega-6), most people don’t realise that there is no such thing as essential carbs. We do not need any carbs for our survival.

Read the entire story by Dr. Mark Hyman in the Daily Telegraph here.

What are you favorite veggies? Let us know in the comments section of Facebook!