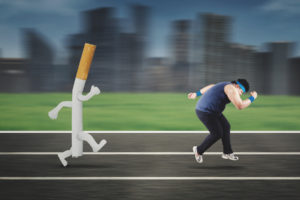 An inactive life is worse than a cigarette-filled one.

Skipping exercise may be more damaging than smoking cigarettes, according to a study published in the journal JAMA Network Open.

Researchers at the Cleveland Clinic studied 122,000 patients on treadmill tests from 1991 to 2014 and compared their mortality rates.

Basically, an inactive life is like having a serious disease. The cure, get off the couch.

Scoring unfit on a treadmill or exercise fitness test is more detrimental than having diabetes, hypertension or smoking, the study revealed.

“Being unfit on a treadmill or in an exercise stress test has a worse prognosis, as far as death, than being hypertensive, being diabetic or being a current smoker,” Dr Wael Jaber, co-author of the study, told CNN. “We’ve never seen something as pronounced as this and as objective as this.”

What’s your favorite exercise? Let us know in the comments section of Facebook!