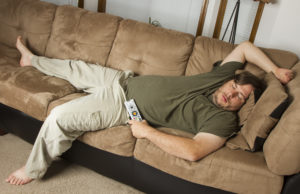 Call it whatever you like — slacker, loafer or couch potato — it’s all inactivity and being inactive increases your chances at deadly diseases.

A recent National Health Service study shows 2 million people will have four serious illnesses within 20 years as a result of obesity and inactivity. As middle-aged folks get older, two thirds of them will have two illnesses including cancer, dementia or arthritis.

“It is primarily the lifestyle factors that are driving these diseases,” said Carol Jagger, professor of epidemiology of aging at Newcastle University. “Obesity and physical activity are the main ones. We are much more sedentary than we were before.”

Jagger analyzed data on 300,000 people over 35-years-old. The results found 45 percent of those ages 65 to 74 have two or more conditions. This will increase to 53 percent when those born in the 1960s reach this age group.

Arthritis from obesity is expected to overcome high blood pressure as the most common illness affecting nine million elderly by 2035.

Cancer will become the biggest culprit, with an increase in the number of patients nearly tripling from 1.2 million today to 3.4 million in 2035. Those with dementia, diabetes, and breathing problems will double.

All this to say, time to get off the couch.