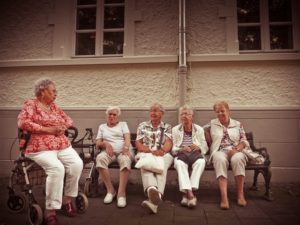 Since the 1980s, when the first “longevity” gene was mapped by scientist Tom Johnson, there’s been more progress made in understanding how we age and how we can slow it down.

The Biology Of Aging

Biogerontology is the scientific discipline dedicated to the biology of aging.

Recent studies have identified key traits — referred to as hallmarks of aging — that attempt to define what aging is.

WATCH: 7 CATEGORIES OF DAMAGE TO THE BODY

Companies focused on aging or age-related diseases are tackling one or more of these biological traits to find promising therapeutic candidates. In the next sections, we’ll explore how each of these are being targeted.

The Relationship Between Aging & Age-related Diseases

Longevity research on its own has seen a lot of progress, especially as we learn more about the biological processes that underlie aging.

But it’s also become more intertwined with research studies focused on major diseases due to similar traits at the cellular and molecular level.

For example, there’s a higher probability of lethal gene mutations as one ages that can result in diseases such as cancer or Alzheimer’s. This is a big reason why many drug companies are targeting aging in an attempt to stave off other degenerative diseases.

Cancer begins when abnormal cells start dividing and growing at an uncontrollable rate. This can happen when the body’s proper safeguards or checkpoints go awry, especially with older age.

These malignant cells continue to replicate until they’ve invaded other tissues, organs, or body systems. Often times, the extent of their growth is only realized after a person develops disease symptoms.

Because the median age for a cancer diagnosis is 66, understanding cancer’s disease pathology could reveal new insights into what exact mechanisms also affect aging.

This is precisely why some drug companies are building out their drug pipelines to include medicines that target both cancer and aging.

Research has shown that the somatic cells (aka non-reproductive cells) in our bodies have protective functions to prevent such tumors from forming.

But, over time, these cells age, lose their functions, and build up in the body. And although they’re technically dead, they’re still metabolically “active.” This means that they can secrete immune cells like cytokines that increase the likelihood of abnormal growths of tissue.

Identifying these pathways to disease could result in a future in which an anti-aging treatment could also prevent certain tumors from growing.

The biggest risk factor for neurodegenerative diseases (NDDs) such as Alzheimer’s or Parkinson’s is aging.

For instance, symptoms for Alzheimer’s disease — a progressive degenerative disorder of the brain resulting in dementia — start appearing in people in their mid-60s.

One of its key features is the abnormal buildup of amyloid plaque or tau tangles in the brain. The condition results in the nerve cells in the brain losing their ability to communicate with each other and with different parts of the body.

In fact, a research study published in September from the Mayo Clinic removed senescent cells in mice, which ended up preventing brain degeneration. More research efforts could provide detailed insights into the relationship between cellular aging and neurodegeneration.