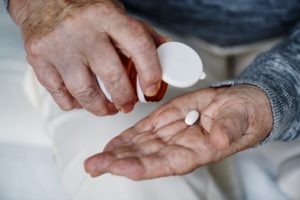 With an understanding of the fundamental biological processes that drive aging, researchers are now searching for drugs that could prolong life.

Taking the long view of aging, it might be said that we have overcome early mortality to be rewarded with chronic disease. Since the start of the 19th century, life expectancy at birth around the world has more than doubled, and currently stands at approximately 70 years. Yet, these gains represent victories against premature death, not the delay of aging. Many people now live long enough to experience cancer, cardiovascular disease and neurological decline.

“Most of what we do in medicine is sick care. We don’t do very good prevention. We wait until people get sick, then we spend a lot of time and effort trying to treat those diseases that come with age,” said Professor Brian Kennedy, director of the Center for Healthy Aging at the Yong Loo Lin School of Medicine, National University of Singapore. “This is a prediction, but I’m going out on a limb to say this: I think it’s going to be easier to slow aging than to treat aging-related diseases.”

In Kennedy’s opinion, aging is a risk factor, a term used to refer to any form of measurable parameter that makes a person vulnerable to a certain medical condition. High cholesterol is a risk factor for heart attack and stroke. Hyperglycemia—high blood sugar levels—is a risk factor for diabetic complications. As one grows older, the chances of contracting virtually every chronic disease increase, making aging the most compelling risk factor to address.

“Doctors don’t wait until you have a heart attack or a stroke—they notice that you have high cholesterol and manage that cholesterol. They don’t wait until you have diabetic nephropathy [kidney damage caused by diabetes], they manage the hyperglycemia,” Kennedy explained. “If we manage the rate of aging, we’re going to be able to prevent disease and maintain bodily functions longer, thus keeping people more active and more cognitively functional. I think it’s the ultimate prevention.”

While the old adage “prevention is better than cure” rings true, slowing aging to pre-empt the onset of chronic diseases is not easily achieved in reality. Aging is a complex process, and the interplay of genetics, lifestyle and the environment means that pinpointing a single cause for aging can be difficult, if not impossible.

Nonetheless, years of research in model organisms and human populations have revealed numerous insights into the molecular mechanisms that control aging. By understanding the rules of the game, so to speak, scientists are hoping to discover or synthesize drugs that can bend these rules in our favor, helping us stay younger for longer.

In Japan, 50 in 100,000 individuals live beyond the age of 100. If there is a secret to longevity, perhaps it can be found in this land of ancients. One group of Japanese residents in particular—the Okinawans—has drawn interest from the scientific community because of its unusually high concentration of centenarians.

Decades of research has shown that diet is a major contributor to the longevity of Okinawans—they consume 11 percent fewer calories than would normally be required to maintain body weight, based on calculations of basal metabolic rate. In other words, they run on a long-term energy deficit, not for a lack of food, but simply by force of cultural habit, known as hara hachi bu—“to eat until you are 80 percent full.”

The life-extending effects of what is now widely known as caloric restriction has been replicated with remarkable consistency in model organisms such as yeast, worms, fruit flies, rodents and monkeys.

These results have led researchers to investigate how caloric restriction results in longevity. Is there a molecular switch that could be flipped to allow one to live to 100? As it turns out, one such potential switch has been found in a family of proteins known as sirtuins.

From Mice To Men

“Sirtuins, which are nicotinamide adenine dinucleotide (NAD)-dependent deacetylases, are believed to be one of the important modifiers for lifespan,” said Professor Hiroshi Itoh, vice chairman of the Center for Supercentenarian Medical Research at Keio University, Japan.

READ: YOUR METABOLISM MAY LOVE THIS NATURAL BOOST

“Our work has shown that NMN, administered in drinking water for one year, improved energy metabolism and prevented aging-related loss of bone density and eye function in mice,” said Itoh. “We also demonstrated attenuation of diabetic nephropathy in mice receiving NMN treatment.”

These lines of evidence are promising. Hence, Itoh and his collaborator, Professor Shinichiro Imai at the Washington University School of Medicine in the US, have embarked on a Phase 1 clinical trial to assess the safety of long-term consumption of NMN.

“Caloric restriction [as a means to slow aging] is not easily tolerated by many people, whereas drugs that mimic the effects of caloric restriction could be more feasible; we can adjust doses according to the individual’s constitution,” said Itoh.

A Cocktail For Longevity

Across the Pacific Ocean, another molecule with potential life-extending effects is being tested in a separate clinical trial. The Targeting Aging with Metformin (TAME) trial is a multicenter study in the US that aims to enroll 3,000 men and women between the ages of 65 and 79 to test whether metformin—a prescription drug used to treat type 2 diabetes—can delay the onset of aging-related diseases.

Metformin already has an excellent track record for safety in humans; millions of patients with type 2 diabetes worldwide have been taking it for more than 60 years, with minimal side effects. But only recently has research hinted at the survival benefits of metformin use. For example, in 2014, scientists in the UK analyzed mortality rates in 78,241 type 2 diabetic patients above 60 years of age and found that those on metformin therapy outlived even their healthy counterparts. Nonetheless, such observational studies only demonstrate correlation, not causation— hence the need for the TAME trial.

While both the TAME trial in the US and the NMN trial in Japan involve only single compounds, Kennedy thinks that in the future, a multi-pronged approach is likely to be more effective at countering aging. He compares the process of drug discovery for aging to how treatments for HIV infection came about.

“Different groups came up with different drugs that might target HIV. None of them were that effective on their own—it was only by combining three drugs that effective therapies were developed. I suspect that’s something we’re going to see with the development of aging-related drugs,” he said.

An Age Of Progress

Before different treatments against aging can be compared and combined, however, there needs to be a yardstick for measuring their effectiveness. Currently, most researchers rely on proxy indicators such as cardiovascular health. The search is now on for a more precise benchmark.

“What we need is a panel of biomarkers that we can generate data from—using a blood draw, or stool samples—to really understand how biologically old an individual is,” Kennedy noted.

Among the best-established biomarkers of aging is telomere length. Telomeres are caps on the ends of DNA in its condensed form (known as chromosomes). Just as the plastic tips of shoelaces prevent the laces from fraying, telomeres help maintain the integrity of genetic material. As we age, our telomeres shorten, and the very code that defines us becomes more fragile. In addition, given the strong link between metabolism and aging, it is perhaps unsurprising that components of the insulin signaling pathway have also emerged as robust biomarkers of aging.

“It’s by putting those biomarkers together with the interventions that we’re going to make progress,” said Kennedy.

Read the entire article by Jeremy Chan at Asian Scientist.