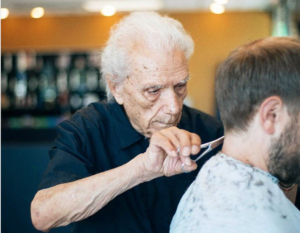 Anthony Mancinelli shook out a barber towel and welcomed the next customer to his chair in Fantastic Cuts, a cheery hair salon in a nondescript strip mall, about an hour’s drive north of New York City.

Actually, Mr. O’Rourke was off by three years. Mr. Mancinelli is 107 and still working full time, cutting hair five days a week from noon to 8 p.m. He has been working in barbershops since he was 11. Warren Harding was in the White House.

In 2007, at a mere 96 years old, he was recognized by Guinness World Records as the oldest working barber. Since then, the commendations have rolled in — from local civic groups, elected officials and barbering companies — all congratulating him: 100 years, 101, 102, and so on.

Happy birthday to Anthony Mancinelli, the world's oldest barber, 107-years-young this month, and still cutting! Here are some wise words he shared with us when we met him a couple years back, when he was (only) 105 🙏🙏🙏

The salon’s speakers were playing hip-hop on a recent afternoon. “He’s used to the windup record players,” Mr. O’Rourke teased.

Mr. Mancinelli has a trim build, a steady hand and a full head of hair, albeit snow white. He spends much of his day on his feet, in a pair of worn, cracked leather black shoes.

“People come in and they flip out when they find out how old he is,” said the shop’s owner, Jane Dinezza.

“He never calls in sick,” she said. “I have young people with knee and back problems, but he just keeps going. He can do more haircuts than a 20-year-old kid. They’re sitting there looking at their phones, texting or whatever, and he’s working.”

Asked — for the umpteenth time — about his longevity, Mr. Mancinelli offered only that he has always put in a satisfying day’s work and he has never smoked or drank heavily.

But no, longevity does not run in his family, and he was never big on exercise. Diet-wise, he said, “I eat thin spaghetti, so I don’t get fat.”

He has all his teeth and is on no daily medication. He has never needed glasses, and his hairstyling hands are still steady.

“I only go to the doctor because people tell me to, but even he can’t understand it,” he said. “I tell him I have no aches, no pains, no nothing. Nothing hurts me.”

READ: A JAPANESE SECRET TO A HAPPY LIFE

One reason he continues to work, he said, is that it helps him stay busy and upbeat after the death of his wife of 70 years, Carmella, 14 years ago. He visits her grave daily before work.

Mr. Mancinelli lives alone, not far from the salon in New Windsor. He drives to work, cooks his own meals, watches television — he is a big pro-wrestling fan — and is adamantly self- sufficient. He still trims the bushes in his front yard with no help.

“He won’t even let anyone sweep up his hair clippings,” said his son Bob Mancinelli, 81, who noted that his father even gives haircuts to himself.

As Ms. Dinezza observed, “he shops for himself, does his own laundry, pays his own bills — it’s crazy. He’s just in the right state of mind.”

“You hear about all these people asking, ʻWhat medicine can I take, what food can I eat, what anti-aging cream should I use?’” she said, “and he’s doing it with none of those things.”

As hairstyles have changed over the decades, Mr. Mancinelli has adapted. “I cut them all,’’ he said, “long hair, short hair, whatever was in style — the shag, the Buster Brown, straight bangs, permanents.”

Some customers have been coming to him for well over 50 years, having gotten hundreds of haircuts.

“I have some customers, I cut their father, grandfather and great-grandfather — four generations,” said Mr. Mancinelli, who has six great-great-grandchildren.

It was an honor learning from Anthony Mancinelli, the World’s Oldest Active Barber, about giving his first cut and shave to his father. What memories do you have of your first haircut or shave?

His son, Bob Manchinelli, said: “Some of his older customers, he helps them in the chair. He’ll say to an 80-year-old guy, ʻListen, when you get to be my age. …’ They love hearing that.”

Jen Sullivan, a stylist who works the chair next to Mr. Mancinelli, is all of 20.

“It’s just amazing that he still works full time,” she said. “Weekends here can get crazy — even I get tired of being on my feet — but he just keeps going.”

Mr. Mancinelli said he was born in 1911 near Naples, Italy, and emigrated with his family when he was 8, joining a relative in Newburgh, N.Y. He was one of eight children — “I’m the only one left” — and went to work at age 11 in a local barbershop. By age 12, he was cutting hair and dropped out of high school to cut hair full time.

Back then, a haircut cost 25 cents, he said. Now, a haircut from Mr. Mancinelli costs $19.

He no longer practices the medical techniques he learned early on from older barbers, such as burning off warts, placing heated glass cups on the torso and using leeches for swelling or high blood pressure.

He does keep in his salon drawer — “for when the electricity goes out” — a pair of manual hair clippers he used before electric hair clippers came into use.

Read the entire story by Corey Kilgannon at The New York Times.