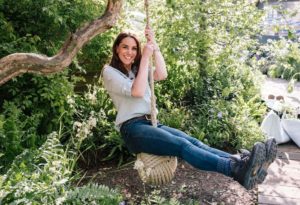 With the grand unveiling of her woodland paradise-themed Chelsea Flower Show garden just days away, Duchess Kate has spoken out about why the project is so important to her—and why she’s committed to getting more children outdoors.

Her big reveal will coincide with the one-year anniversary of the duchess and the Royal Foundation establishing an expert committee on early childhood development to explore ways to better support children, expectant mothers, and new parents in the U.K. As the steering group concludes its research and reports, Kate has shared her thoughts on the findings in a letter thanking those involved for their efforts.

“In recent years I have focused much of my work on the early years and how instrumental they are for outcomes later in life,” she writes. “I believe that spending time outdoors when we are young can play a role in laying the foundations for children to become happy, healthy adults.”

I believe that spending time outdoors when we are young can play a role in laying the foundations for children to become happy, healthy adults.       —The Duchess of Cambridge

Kate’s efforts with the Chelsea Flower Show project are part of her ongoing initiatives providing children with opportunities to spend time outdoors and give them the best start in life. More time outdoors, she says, plays a pivotal role in a child’s future health and happiness.

“What happens in our early years is vital to our being able to engage positively in school, and in work and society, and ultimately, to how we bring up our own children,” the duchess says of the scientific research presented to her by the group. “The first few years of life, from conception to five, are pivotal for our future health, happiness, and ability to cope with adversity—and probably more so than at any other point of our lifetime. Understanding that our brain develops to 90 percent of its adult size within these first five years helps crystalize how our experiences in these earliest years are so impactful, and influences who we become as individuals.”

The Duchess of Cambridge spent 20 hours last week digging and planting in preparation for the debut of her “Back to Nature” garden. Kate has been working alongside award-winning landscape architects Andrée Davies and Adam White and the Royal Horticultural Society (RHS) on the woodland wilderness-themed project since January, and has been closely involved in every step of its journey. “The duchess and landscape architects Davies and White have visited plant nurseries, suppliers, and specialist craftspeople who have been growing and building elements of the garden for Chelsea,” says a Kensington Palace spokesperson.

The plot aims to combine elements of traditional English gardens with the outdoor fun her own children, Prince George, Princess Charlotte, and Prince Louis, enjoy and special moments from her own childhood. As well as den space, the garden features a treehouse and a rope swing, which the Duchess happily road-tested during a Friday, May 17 visit.

It was during the same visit that green-fingered Kate also helped plant extra blooms and shrubs, including Princess Diana’s favorite forget-me-nots and some wild ferns. She also checked over some of the other design features that have been installed to encourage children to stay active and engaged, such as stepping stones, hollow logs, and a stream to play in.

“There are undoubtedly challenges in trying to bring about the transformation that will make positive change for generations to come, and help break the inter-generational cycle of disadvantage and trauma, yet I am inspired every day by the people I meet and am committed to supporting this endeavor,” Kate writes. “I hope my long-term commitment to working in the early years will help make a difference over a generational timescale.”

What plants would you love in a garden? Let us know on Facebook!