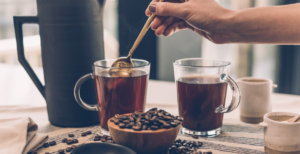 Forget apples. If you want to keep the doctor at bay, try drinking four — yes, four — cups of coffee a day…at least according to one study.

In Pamplona, Spain at the Seguimiento Universidad de Navarra a study focused on coffee intake and it’s correlation to the risk of death. Nearly 20,000 participants, with an average age of 38 years, were followed for 10 years. During that period, 337 participants died, but the results showed that those drinking up to four cups of coffee daily had lowered their risk of dying by 64 percent compared to those who did not drink coffee or almost never had a cup.

READ: Diet, Not Drugs, Can Heal The Body

“Our findings suggest that drinking four cups of coffee each day can be part of a healthy diet in healthy people,” said Dr Adela Navarro, a cardiologist at Hospital de Navarra, Pamplona, Spain, who conducted the study.

As such, the study factored in sex, age, food intake, lifestyle, health condition. It also considered whether or not the participants followed the Mediterranean diet. Those who were at least 45 years of age and drank an additional two cups of coffee lowered their risk by 30 percent. The increased coffee consumption did not appear to lower the  risk of death among younger participants.

READ: WHY SMELLING THE OPPOSITE SEX CAN AGE YOU

It’s not the first time scientists have looked to coffee’s impact on longevity. Past studies in the U.S. and Europe have also looked to see if coffee could be life’s secret elixir. The common thread in the studies has been the narrow…but wouldn’t it be nice to add it to the list of delicious things, like chocolate, wine and sex, that could lead to a longer life?

Can a cup o’ Joe keep you alive? Let us know what you think in the comments section of FACEBOOK.