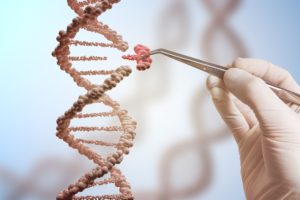 Scientists have discovered a way to rewrite the genetic script in the hopes of someday curing diseases like cancer and Alzheimer’s.

A new method, RNA REPAIR, edits genes by flipping on and off the protein production machinery of some cells. The process could treat diseases of muscles, the brain, liver and kidneys, as well as cancer and auto-immune disorders.

We can control human biology.

Another significant achievement is a new “base editor” that fixes single-letter mutations in DNA without causing unintended changes in the genome. These genetic editors show how scientists are not only able to read genes, but can temporarily change them.

READ: ASTROCYTE CELLS ILLUMINATE HOPE IN THE FIGHT AGAINST PARKINSON’S

The method may allow doctors to tweak a cell’s protein machinery up or down depending on necessity, for example, in order to temporarily block cells that fuel cancer.

Another future use could be to slow the degeneration of neurons in patients with Alzheimer’s, Parkinson’s and amyotrophic lateral sclerosis or Lou Gehrig’s disease.

Want to join the conversation? Head over to our Facebook page!