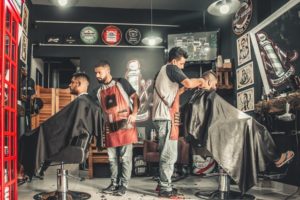 How many dudes are going to the doctor? Not many.

For African-American men suffering from hypertension, that means barbershops. Not only will they get a chance to trim their hair and beard, but also trim their blood pressure levels, too.

African-American men are at a higher risk of hypertension than other ethnicities. This is in part because they are less likely to go see a doctor.

The late Dr. Ronald Victor, a professor at Cedars-Sinai Medical Center, decided to bring pharmacists to barbershops in Los Angeles County for a study recently published in Circulation. The findings were as fresh as the cuts.

READ: NEARLY HALF OF AMERICANS HAVE SOME FORM OF HEART DISEASE

When the study started, all 319 men at 52 barbershops suffered hypertension. Each location randomly chosen either as a control site where barbers talked to clients or where pharmacists visited every few weeks.

Many of the men in the study hadn’t seen their primary doctor in more than a year or didn’t have one. Pharmacists worked with doctors, allowing them to monitor their blood pressure, run simple blood tests, and prescribe medicine when needed.

These men visiting the barbershops reduced their systolic pressure by nearly 30 mmHG, compared to 7 mmHG among men whose barbers only talked about high blood pressure and encouraged their clients to see a doctor.

READ: ARE YOU A MENTAL COUCH POTATO?

“There is such a shortage of primary care physicians that many are overwhelmed by the patient load,” Ciantel Blyler, one of the pharmacists, said. “The barbershop is a social hub for black men.”

Often men hang out, get their hair cut, watch TV or play a game of cards. “It was easy to convince them to come see me for 30 minutes,” she said.

A new study is planned for Nashville, Tennessee working with Vanderbilt University.  The hope is the study will become a national model.

How often do you visit your doctor? Let us know on Facebook!