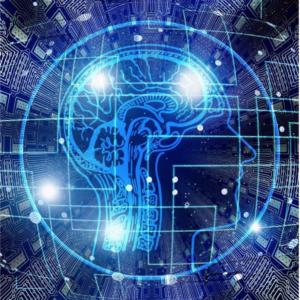 Can vectors accomplish anything? Should you care about them? The answers are yes and yes.

Ultimately, it is vectors that are used to represent data of all kinds. If you want to get a machine to learn how to make a guess as to whether a woman will respond well to chemotherapy for ovarian cancer, you could use a list of values where each value is how much of each gene is expressed in a tumor sample. This list is an example of a vector.

Many machine learning algorithms eat vectors and learn to eventually spit out a vector which represents a decision about someone, something, or a group of people or somethings it has never seen before. This is, briefly, a big deal.

We can train a machine to be able to make predictions about an object which, in turn, gives us humans the power to forecast the future.

We have been doing this for thousands of years through the power that mathematics provides when you figure out a model that has enough elements of reality within it. If you capture enough of reality in your model, you can then peer into the future. Take the Babylonians, for instance, who were calculating the movements of celestial bodies.

We can train a machine to be able to make predictions about an object which, in turn, gives us humans the power to forecast the future.

The utilization of statistics, physics and other mathematical methods have been used to predict occurrences like the weather. Completely unrelated, this powerful trio has also been used to identify the potential ramifications of eating that greasy sandwich. This is stuff we all now know about. If you eat too many high calorie foods too often, there will be obvious consequences, for most of us, like weight gain.

However, there are also those people that don’t gain weight. The rules don’t apply to them or they apply differently. Why?

The models call this subset of people outliers and they demonstrate a potential lack of understanding about our universe and how things work. This is when we ask, “What factors play a role in these outliers?”

Genetics, obviously. But then one must dig in and realize that this itself is a complex labyrinth. The person’s microbiome plays a role as well. That is, the types and number of bacteria that live in one’s gut. There are other potential factors, but in the interest of getting to the point, this is sufficient.

One definite place where the power of machine learning really shines — glows resplendent, shall I say — is when we have an incomplete understanding about a system. We don’t really need to understand the universe in a deep way when using these tools because modern machine learning can be thought of as a net that can catch the unknown fish from within the little pond where we wish to make predictions.

We don’t need to understand what the genes are doing or how the microbiome is affecting weight gain, but instead we just need to prepare vectors which represent humans or a facet of a collection of humans. Here is where machine intelligence captures some essential set of correlations that partitions the population of weight gainers, from the envied thin. A model is formed and tested and, astonishingly, it replicates on a test set.

The question is, is this enough?

Well, sometimes it is and many times it is not. I can tell you that in medicine this is not satisfactory. It is one thing for a model we build to predict something accurately, but it is a very different thing to understand why it is making the prediction it is.

WATCH: THIS IS WHY YOU WILL LIVE A VERY LONG LIFE

In medicine, it is very possible that a prediction could have life changing consequences and thus, as scientists we wish to understand what is happening. Clinicians want to know how their actions are going to affect a patient and for what reason. Next, this understanding is what allows us to approach a new frontier of therapy, which is the basic goal of engaging scientifically with the understanding of disease.

This is where Augmented Intelligence [AI] comes in. Over the past eight years, I have focused most of my scientific effort in answering the following five questions:

The immediate problem is that this paradigm requires the use of machine learning that is capable of being transparent about what it learns, but simultaneously complex enough to learn about heterogeneous patient populations. Something like this could help scientists begin to explore disease from the patient level and extract a new understanding about how to treat them.

Deep neural networks require a lot of data and do well at learning in a supervised way, but we need something that can learn from smaller data and extract subpopulations that have never been considered. Forest based methods are very powerful, but they won’t be able to have the interactivity we require for this goal. We need to find great models that will reproduce, but we also need the ability to explore and understand the potential subpopulations that can emerge.

AI is what is available…and the impact it will have on our health care is massive.

Well, this is not the place for the mathematics behind a solution we have been working on, but we can show you how we deal with this problem now…

AI is what is available to us now and the impact it will have on our health care is massive. It allows us to take in a set of data and extract an understanding about the way people come together in various ways. It also shows us the way this influences how we think about treatment options.

There are many relationships that exist between any group of individuals and AI can be used to find the various relationships. Consider the image below. 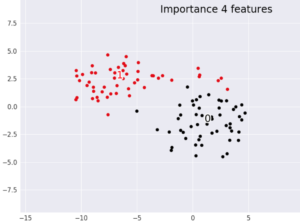 This shows a model found by a machine learning algorithm we call Random Forest and the visualization used an algorithm that the Geoffrey Hinton, the godfather of deep neural networks, helped create.

Each point is a person with lung cancer. The machine was asked to find the difference between people with one type of cancer and another…and I can say that it did a good job. We can all see the two populations.

Now, this is what happens when you pass the same data through an Augmented Intelligence platform: 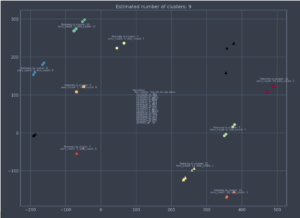 We call this image a “map.” Notice all the subpopulations?

Each point is still a person and it gets the same accuracy as the other method…even perhaps a bit better. This method is revealing the way people come together into different subpopulations with different genetic signatures in ways we have never seen before.

How do we explore this space? How does the machine explain itself? 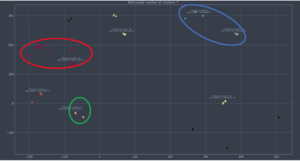 The image, directly above here, shows another map which is another configuration of lung cancer subtypes. The colored loops are created with a mouse. You can then ask the machine, “What genes are involved here?” and “What are you seeing between these three subpopulations?”

In addition, if you don’t agree with a variable it is including you can remove it and regenerate the models and study what happened. A true augmented process where the machine and the human expert work together to discover and create a predictive model.

The machine generates several of these maps and they come together to help us understand many diseases.

Alzheimer’s disease and Parkinson’s starts to look like many different diseases when you go through this process and already methods like this are helping scientists understand how to treat certain subtypes.

What used to take months and years can be accomplished in minutes now, assuming the data is put together correctly.

For example, this process told one of our scientists the use of glitazones — a drug used for targeting insulin resistance in diabetes patients — is associated with a decreased risk of incident of Parkinson’s Disease in a certain subpopulation of people.

This type of Augmented Intelligence can have a massive effect on the future of medicine. It brings on the promise of precision medicine.

This activity also shows that there is more to machine learning than deep learning and that there is still a lot of unexplored territory in this space. Ultimately however, I am quite sure that vectors will always play a role.

Dr. Joseph Geraci is a Canadian mathematician, medical scientist and quantum machine learning specialist. He is the Chief AI Officer and President of NetraMark which he co-founded in 2015.