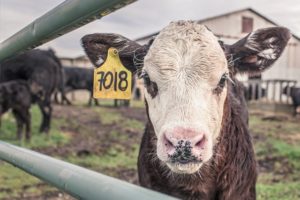 The F.D.A. banned the use of antibiotics for growth promotion in animals last year. One organic cattle farmer is sure the ban is being flouted.

In 2015, Sandy Lewis, a small-time organic cattle farmer in upstate New York, bought 13 bulls, for around $5,000 each, from a breeder in Oklahoma. A few weeks after the animals were trucked to his farm near the Vermont border, Mr. Lewis discovered that two of the bulls had died. He could see holes in their abdomens from where they had gored one other.

A field autopsy proved inconclusive. When two more bulls among the new herd fell sick, Mr. Lewis shipped them off to Cornell University to be examined. One died along the way, but a blood test on the living bull provided the answer: It had anaplasmosis, a bacterial illness that destroys red blood cells and deprives the animals of oxygen, causing them at times to act violently. The disease is relatively rare in the Northeast, yet a quarter of Mr. Lewis’s herd ended up becoming infected. He lost another six animals to the disease and spent more than $100,000 trying to save the rest. Ultimately, another 100 animals had to be culled.

The costly experience propelled Mr. Lewis, an intense, cranky and compulsive former Wall Street arbitrageur, on a two-year investigative journey into the use of antibiotics on American animal farms. Now he is asking a question he believes government regulators and the meat industry urgently need to grapple with: Are pig, cattle and poultry farmers misusing antibiotics, allowing too much of the drug to get into our food?

It has long been common knowledge in farming that antibiotics can help cause animals to grow fatter faster. Time is money, particularly in the food industry, and for many years ranchers used antibiotics not just for treating diseases but also for promoting growth so that animals would be ready for the slaughterhouse sooner. (Mr. Lewis says his grass-fed steers require 27 months to get to market without antibiotics, more than twice as long as it takes cows pumped full of antibiotics.)

In early 2017, the Food and Drug Administration enacted rules banning the use of human antibiotics purely for growth promotion in animals and requiring ranchers to get a prescription from a veterinarian for antibiotics that once could be purchased over the counter. The F.D.A. enacted the restrictions out of growing concern about the breeding of drug-resistant bacteria from antibiotic overuse. Those resistant bacterial strains can be transferred to humans by contact with animals or raw meat and possibly through the consumption of undercooked meat.

READ: IS GENETICALLY CONTROLLED PEST CONTROL WORTH THE RISK?

The growing resistance of bacteria to antibiotics causes some 23,000 American deaths a year and $34 billion in financial losses annually, according to the Centers for Disease Control and Prevention. The C.D.C. also estimates that more than 400,000 United States residents become ill with infections caused by antibiotic-resistant food-borne bacteria every year, with about one in five resistant infections caused by germs from food and animals.

“Antibiotic resistance is of great public health concern because the antibiotic-resistant bacteria associated with the animals may be pathogenic to humans, easily transmitted to humans via food chains, and widely disseminated in the environment via animal wastes,” South African researchers observed in a recent article published in the journal Molecules.

“You don’t even need a sick animal in the herd to use antibiotics in the feed and water as long as the justification is ʻdisease prevention’ not ʻgrowth promotion’,” Avinash Kar, a senior attorney at the Natural Resources Defense Council, told me.

Veterinarians working for certain feedlots — industrial-style farms where chickens, pigs and cattle are fattened — seem more than happy to continue writing prescriptions for antibiotics that end up in livestock feed. “They’ve got their veterinarians on retainer,” Mike Callicrate, a cattle rancher in Kansas and Colorado, told me. “They tell them what they want, and the veterinarian darn well provides what they want.”

Veterinarians deny this. Dr. Lloyd Barker, the veterinarian to the rancher who sold animals to Mr. Lewis, said vets are “toeing the line” and added, “Our primary goal is prevention.”

Mr. Kar said that of all the “medically important” antibiotics sold in the United States — that is, those used to treat human disease — about 70 percent goes into the feed and water of animals, indicating to him that overuse on the farm is still rampant.

It is difficult to document antibiotics abuse, however, because the F.D.A. does not collect data on the reason for the use of the drugs. But the agency says that it is working to obtain better data to help monitor potential misuse.

Beyond the threat of drug-resistant illness, there is evidence of another risk from antibiotic overuse in pigs, poultry and cattle: the possibility that people who consume antibiotic-laced meat will get some of the drugs, as well as resistant bacteria, into their own digestive tracts — with potentially harmful results.

Read the entire article by William D. Cohan in the New York Times.

How much do antibiotics in meat worry you? Let us know in the comments section of Facebook!