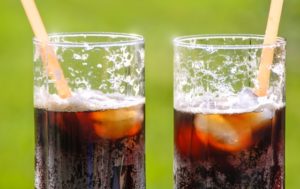 Sugar-laden fizzy drinks also increase the risk of early death from any cause by a fifth – and are also fuelling a rise in cancer cases, Harvard experts said.

While swapping to Diet Coke – or diet versions in general – is better, drink more than four a day and you’re still at risk of dying young.

In fact, previous studies have shown that the six common artificial sweeteners – aspartame, sucralose, saccharin, neotame, advantame and acesulfame potassium-k – have all been found to be toxic to gut bacteria.

WATCH: JUST TELL ME WHAT TO EAT

They’ve been associated with weight gain, slashing the chances of getting pregnant during IVF, tripling the risk of a deadly stroke and dementia, and raising the risk of developing diabetes.

Experts said the best option is to ditch fizzy drinks altogether and stick to water instead.

“Our results provide further support to limit intake of sugar-sweetened beverages (SSBs) and to replace them with other drinks, preferably water, to improve overall health and longevity,” said Dr. Vasanti Malik, who led the study at Harvard Uni in the US.

You can watch part of her talk below.

The new study, published in Circulation, looked at data from 80,647 women and 37,716 men who had answered questionnaires about lifestyle factors every two years.

They found that the more sugar-sweetened drinks a person drank, the more his or her risk of early death from any cause increased.

Drinking two a day increased that risk by 14 per cent, while those guzzling more than two a day had a 21 per cent increased risk of early death.

They also had a 31 per cent higher chance of dying young from heart disease.

Each additional drink consumed per day increased the risk by another 10 per cent.

Researchers also found a link between sugary drink consumption and an early death risk from cancer.

Previous studies have linked these beverages with weight gain, type 2 diabetes, heart disease and stroke, but few have looked at mortality.

Walter Willett, professor of epidemiology and nutrition, said: “These findings are consistent with the known adverse effects of high sugar intake on metabolic risk factors and the strong evidence that drinking sugar-sweetened beverages increases the risk of type 2 diabetes, itself a major risk factor for premature death.”

“The results also provide further support for policies to limit marketing of sugary beverages to children and adolescents and for implementing soda taxes because the current price of sugary beverages does not include the high costs of treating the consequences.”

Read the entire article by Gemma Mullin at The Sun.

Have you cut soda from your diet? Let us know on Facebook!