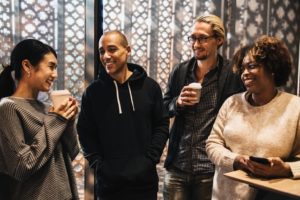 The popular premise that genes are the blueprint on a strand of DNA that decide growth and its variations doesn’t hold up anymore.

It might seem like just another scientific snafu, but the scientific research has evolved to show misconceptions of past hypotheses have big implications in our lives today.

In a recent article published in Nautilus, the history of gene theory is explored starting from the Gregor Mendel’s 1850 pea plant experiments that were the gateway to “heredity units,” aka “genes”.

The theories of this “code-script” concept eventually led to social profiling beginning in the 1920s. A world order of rank and privilege led to intelligence testing and determining “worth” of different races.

By the 1930s you had the rise of eugenics paired with the Nazi movement, Hitler and the Holocaust. Today, the issues are relevant from social genetic trait profiling to genetically engineering the perfect baby.

READ: THE WORLD’S MOST FAMOUS GENETIC TOOL HAS A MAJOR DIVERSITY PROBLEM

The discovery of DNA in post-war research coupled with creating technology for sequencing genes, led to the Human Genome Project which promised to “reveal what it is to be human” and how to control intelligence, social behaviors and diseases.

Don’t spit into your mail-in, DNA test cup just yet.

Today, scientists have discovered cells and organisms can do their own “natural genetic engineering,” according to James Shapiro in Physics of Life in 2013. They are able to change their own DNA sequences and rewrite their own genomes throughout life.

It explains why genetically identical animals that grow up in the same environment don’t become the same adults.  It also makes sense why the same genetic resources can be used in multiple ways for tissues and organs, something scientists have pondered for years.

And there is no connection between how many genes a living thing has and how complex it is. For instances, humans, flies and fleas have about 20,0000 while a carrot has 45,000.

It’s plain to see how we got this so wrong. Just look at a relative to see how many familiar features they have to another: hair, eye color, height.

READ: REWRITING THE CODE OF LIFE

In the past, cells were believed to be under the control of DNA. DNA acts more like a database that only kicks in when the organism uses it to make proteins, according to British biologist Denis Noble.

According to Richardson, scientists now know that the DNA code is more of a template than a complete instruction manual. He compares the DNA code of proteins to the letters on a typewriter. The code alone can no more create a fully-functioning person than typewriter keys can produce a story.

This explains why genetic resources could have infinite permutations and functions. Examples range from genes used to develop arms and legs, first appeared in organisms that have neither and genes used in fruit flies for gonad development are now used in the development of human brains. Genes are one factor and genes change.

Cells also change. They change their metabolic pathways and how they utilize genes to suit them. Cells learn and create instructions. Genes are the templates for making the necessary resources but they don’t guide the outcomes.

So what happens in families? Parents give their children more than their genes: enzymes and other proteins, amino acids, vitamins, minerals, fats, for example. Each of these factor into development.

In the end, genes are getting a big demotion and cells, now believed to have knowledge or intelligence of their own, are moving up the evolutionary ladder.

Have you used mail-in, DNA tests to learn more about your health? Tell us about it on Facebook.

METFORMIN: SHOULD YOU, OR SHOULDN’T YOU?