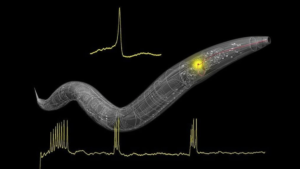 The next time you see a worm, maybe say, “Thank you!” for nearly doubling your lifespan.

C. Elegans worms are the celebrities of the research world. It’s because they only live a few weeks and its genome is close to humans, making it an ideal test subject.

According to a recent article in New Atlas, scientists just found blocking an enzyme significantly lengthens the life of C. Elegans, in some cases, up to 45 percent. In the new study, the Scripps Research team used these worms to test for enzymes that might be linked to human aging.

By interrupting enzymes, scientists were able to study the effects on the worm’s life.  They used 100 small molecule compounds that block enzymes called serine hydrolases in the first day of the worm’s “adult” life. A few hydrolases were found to extend the lifespan of the worms by more than 15 percent, but one far exceeded the others—a carbamate compound, JZL184.

JZL184 increased the worm’s life by 45 percent. After 30 days, the control worms had all perished, but that still meant more than half of the worms were still alive and kicking…or, shall we say, ‘wriggling’ as would be the case for a worm.