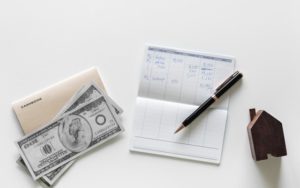 Working Americans are still struggling when it comes to saving money for both their short-term and long-term goals: More than one in five (21 percent) don’t save any of their annual income.

That’s according to a new survey from Bankrate.com, which asked 1,000 working American adults how much of their annual income they set aside for retirement, emergencies and other financial goals.

And those who do save, Bankrate finds, aren’t setting aside a lot: 20 percent save only 5 percent or less of what they make, and 28 percent save 6 to 10 percent. Just 16 percent are saving more than 15 percent of their income.

Researchers at the Stanford Center on Longevity project that, if you want to retire at age 65 and maintain your standard of living, you need to put 10 to 17 percent of your current income into a retirement account. And that’s if you start saving as early as age 25. 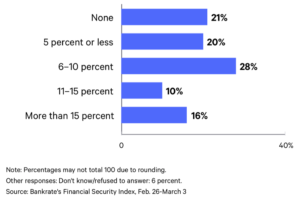 Younger people, in particular, are having a hard time: “Older households (age 55 and above) are more likely than other age groups to be saving more than 10 percent of their annual income,” Bankrate reports. “Millennials and Gen Xers, on the other hand, are more likely to say they’re not saving any money at all.”

The survey also offers insight into why much of the population is lagging behind. When Bankrate asked survey participants why they aren’t saving more money, the most popular response was “expenses,” followed by “haven’t gotten to it” and “job isn’t good enough.” 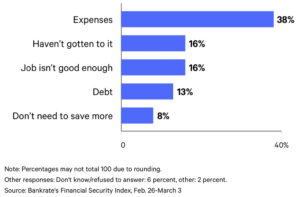 Sure enough, day-to-day costs continue to soar. Middle class life is now 30 percent more expensive than it was 20 years ago. The cost of big-ticket items like college, housing and child care has risen precipitously: The cost of public universities doubled between 1996 and 2016 and housing prices in popular cities have quadrupled, Alissa Quart, author and executive director of the Economic Hardship Reporting Project, tells CNBC Make It.

The good news is there are ways to make progress without feeling cash-strapped or committing to any drastic lifestyle changes:

Read the entire story by Kathleen Elkins at CNBC.com.

Have you started saving for retirement? Let us know on Facebook!