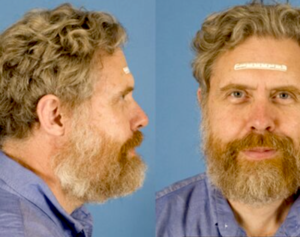 If you look up ‘scientific overachiever’ in the dictionary, you’re likely to find a two-word definition: George Church.

The American geneticist, molecular engineer, and chemist splits his time between roles as Professor of Genetics at Harvard Medical School and Professor of Health Sciences and Technology at Harvard and MIT. He’s also a member of the National Academy of Sciences, acts as an advisor to a plethora of cutting edge companies, and heads up synthetic biology at the Wyss Institute for Biologically Inspired Engineering, of which he’s a founding member.

Oh, and George is author to hundreds of published papers, 60 patents and a popular science book (also, theoretically, George Church may live in an alternate reality where there are more than 24 hours in a day).

Along with being recognized for his many contributions to science—including the sequencing of genomes—he’s well-known for his claim to have uncovered a method to reverse aging.

Probably we’ll see the first dog trials in the next year or two.

When the average layperson hears a statement of that magnitude, they’re less interested in the how (gene editing) than the when; but while Dr. Church may be one of the most prolific scientists on earth, he’s no psychic.

“The simple answer is, I don’t know,” he confesses in an interview with Elysium Health’s Endpoints. “Probably we’ll see the first dog trials in the next year or two. If that works, human trials are another two years away, and eight years before they’re done. Once you get a few going and succeeding it’s a positive feedback loop.”

So what would the results of age reversal look like?

“It’s actually taking biomarkers toward a younger age,” he states. “A lot are molecular, but they’re also physiological: strength, memory, resistance to immune insult, the list goes on. If you have something that’s truly systemic there should be a correlation with how you look, too.”

READ: IS DYING OF OLD AGE A THING OF THE PAST?

Church’s outlook on superintelligent machines isn’t quite as rosy—when asked about its feasibility, he bluntly replied, “it’d be like having a human compete with a jet engine. It’s not what humans evolved to do, so it’s not surprising they can’t do it.”

“Things that humans are good at are among the most valuable things: thinking outside the box, thinking about the future, speaking diplomatically, educating about ethics. We’re very good at those cognitive tasks, and we’re very poor at teaching them to machines.”

If we can’t transmit consciousness into a machine, then it’s a good thing he’s planning to reverse the aging process, don’t you think?